Robert’s book, Song for a Summer Night: A Lullaby, has been nominated for a 2016 BC Books Prize: Christie Harris Illustrated Children’s Literature Prize!

Click the cover to learn more about the book! 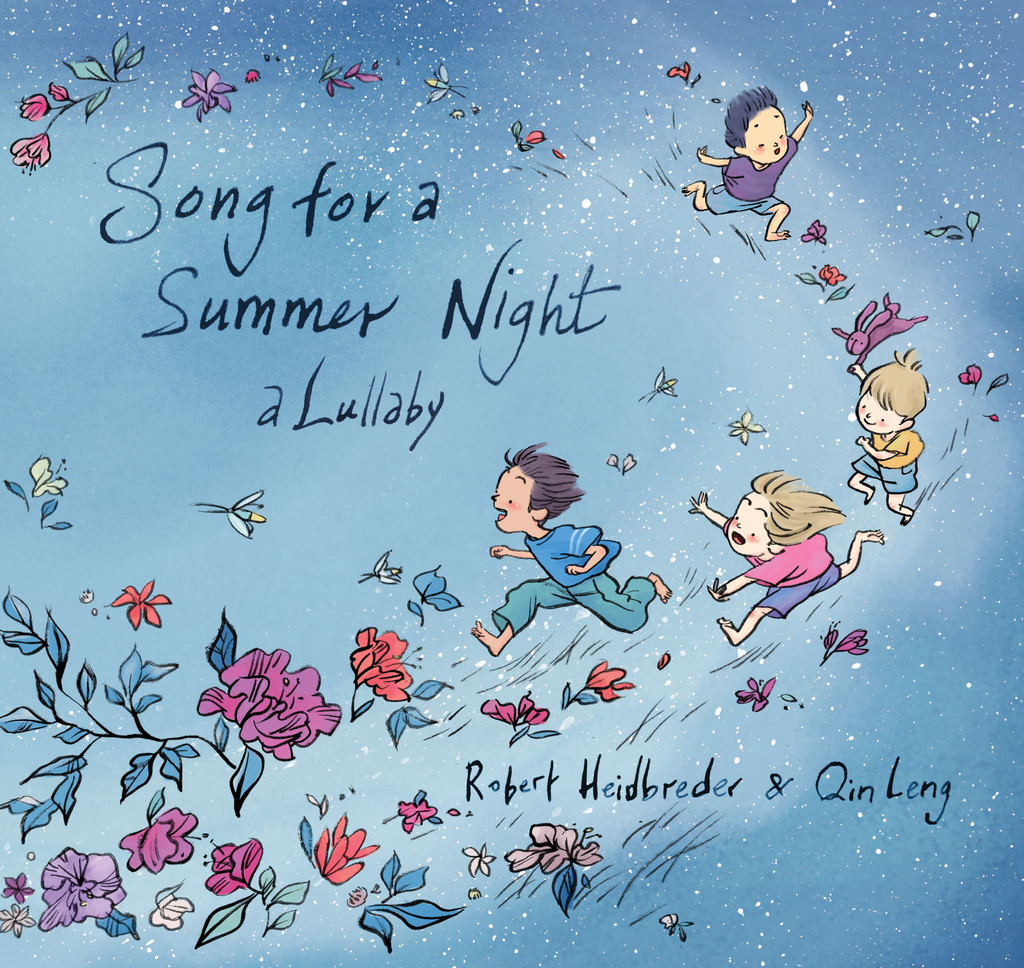 This website will be reorganized soon, but in the meantime please see below and visit these publishers for information on Robert Heidbreder and his work: 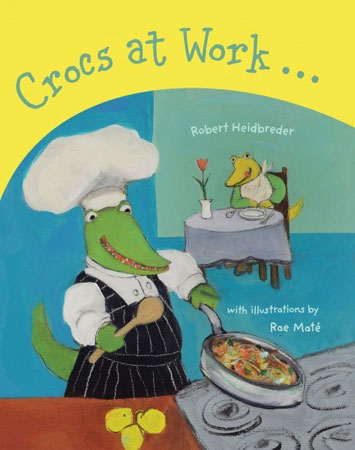 It has been a busy time this last year. In addition to seeing Song for a Summer Night come into the world, I have had lots of fun with Rae Maté in creating a new book about those silly, busy crocodiles that many of you have already made friends with in Crocodiles say… and Crocodiles Play! We think you will enjoy seeing what the Crocs are up to now, when they go to work. 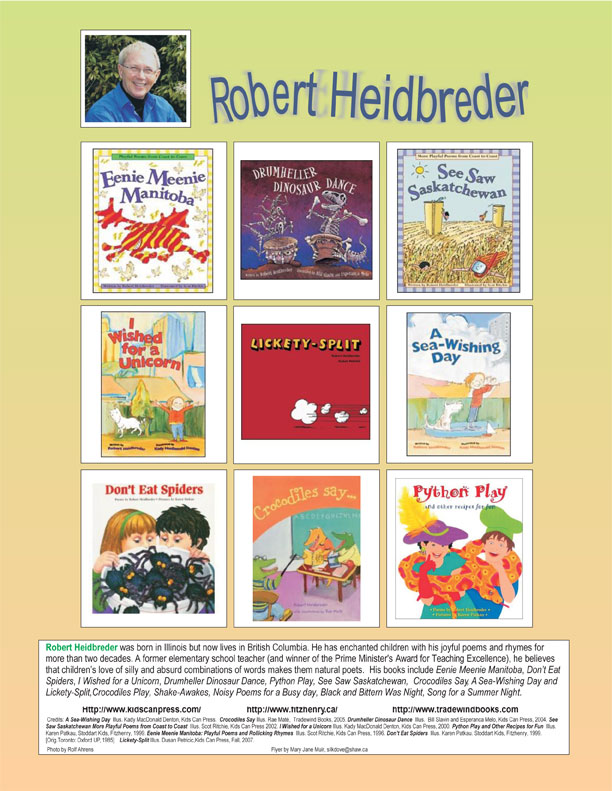 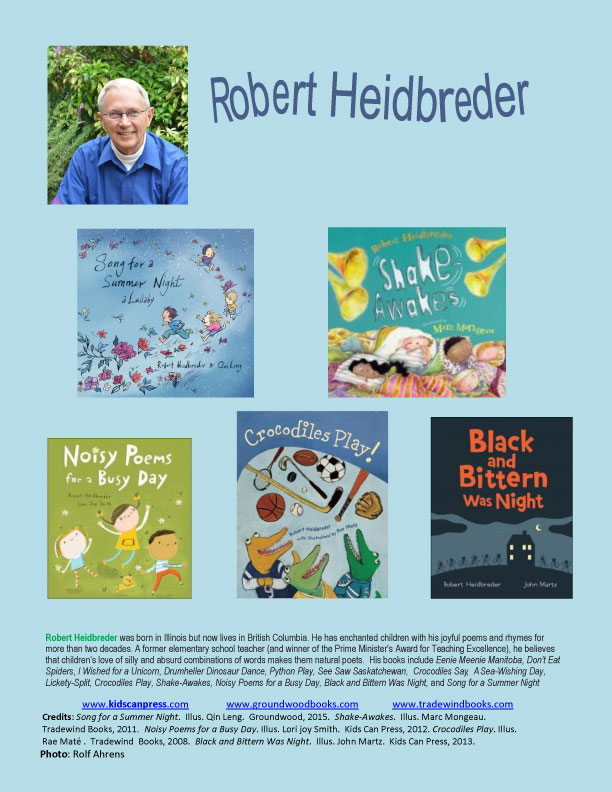 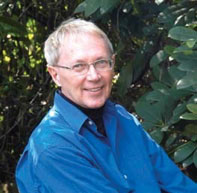 I was born in Quincy, Illinois, along the banks of the meandering Mississippi River in 1947, but I never liked to meander much myself. I preferred to hop, bop, thump and jump around, even in the Mississippi mud, and especially on my Grandma’s and Grandpa’s farm.  The barn became my secret hide-away, where Grandpa attached a swinging rope to help me hop-drop-swing-fling into my very own bale-of-hay house; the fields of corn became magical lands of “a-mazing” adventures and the farmyard mule became my stubborn, beloved pet.

Playing was easy, but reading was not. I didn’t take to books until Grade 6, but early on I embraced the invigorating bounce of poetry.  I recited the childhood rhyme ‘Fuzzy Wuzzy Was a Bear’, until my irritating older sister, Susie, ran around screaming in circles and I learned to spell and dance out the word Mississippi even before I could spell my last name. (No wonder with a last name like that!)

In Quincy Junior High School and High School, I finally came to love reading and writing and I became a member of the National Honour Society. The Latin Language bug bit me and I single-handedly tried to bring the dead language alive again by annoyingly speaking in Latin to my family.

In 1965 I attended Grinnell College in Grinnell Iowa, where I majored in Greek and Latin, wrote some poems for the college magazine and was elected to another national honour society, Phi Beta Kappa.

In 1970 I immigrated to Vancouver (where I still live) for graduate studies in Classics at the University of British Columbia. In 1975 I took my teaching degree from UBC and started teaching primary children, which I did for 30 years until retirement in 2005. In 2003, nominated by students, parents and staff, I won the 2002-2003 Prime Minister’s Award for Teaching Excellence. (WOW!)

The children in my first classes inspired me to write, and originally I wrote just for my classes.  I found their innate, natural love of language and language play matched my own love of language as an adult and as a child. Children helped me re-discover the childhood vision and laughter within.

My wife, Jane, whom I met in 1972 when I bought from her the Lewis and Short Unabridged Latin Dictionary, encouraged me to try getting my poems published. So I sent them off to Oxford University Press in Toronto. Three days later I was thrilled when William Toye, the first of my encouraging editors, phoned to accept the manuscript that became Don’t eat Spiders. Over the following years, I have written fifteen books and worked with wonderful illustrators and editors.

Now that I have retired from teaching – but not from writing - I spend my days cycling, reading, writing, gardening, counting crows and entertaining my own and neighbourhood cats with puppet shows in my garden. I also visit schools to get children and teachers rhyming and wriggling away. And I do talks and readings for writers’ festivals and associations devoted to children’s literature. My writing has taken me from British Columbia to Newfoundland and some places in between. My many presentations help to keep inside my rattle-prattle head the laughter, bounce and rhythm of childhood.

When I taught kindergarten and grades one and two, I was known as “Mr. H.” Here is a picture of me with one of my pupils, Spiro. He drew this for me.

You can read more about my teaching and fun in my classroom recorded in a film, Mr. H and His Unruly Puppets elsewhere on this website.

Other bits of information that relate to me...

2003
Winner of the 2002-2003 Prime Minister’s Award for Teaching Excellence.
Author Profile in Something About the Author Volume 130 (Gale Publishing)

2002
Entry about Robert Heidbreder in Encyclopedia of Literature in Canada. Ed. W.H. New (U of Toronto Press)

Other places you will find some of my writing...

Python Play and Other Recipes for Fun
Our Choice, 2000. Canadian Children's Book Centre.

Mr. H and his Unruly Puppets
Directed and produced by Annie O'Donoghue
30:00 • 2009 • closed captioned
Available on DVD and VHS
Distributor: Moving Images Distribution. http://www.movingimages.ca
This is a film about my teaching and working with children, created by the brilliant and thoughtful Annie O’Donoghue, when she was in Film at UBC, in 2008. Here’s a poster for the first showing of the film. 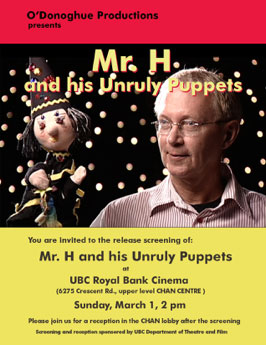 About Mr. H and his Unruly Puppets

Robert Heidbreder —“Mr. H.” to his Grade One students—is a recipient of the Prime Minister’s Award for teaching excellence. Throughout his 30-year tenure with the Vancouver School Board, he developed a classroom where learning is challenging and fun. A cast of over 50 puppets, led by the wise wizard Alphaterwa and the unruly Stanley C. Crow, transforms the Grade One curriculum into a year-long interactive drama. Children learn to read because each puppet has a poem that is used to activate that puppet’s power.

Mr. H.’s passions as a poet and an award-winning children’s author are evident in the letters, clues and riddles written by Mr. H. and sent to the children by the puppets each morning. The children’s responses to the letters create the content, climax and resolution for their daily adventures under the watchful eye of the puppet master and teacher, Mr. H. In a climate of standardizing educational ideologies, Mr. H and his Unruly Puppets shows a refreshing counter balance, celebrating a style of collaboration with young children that truly exemplifies the art of teaching. 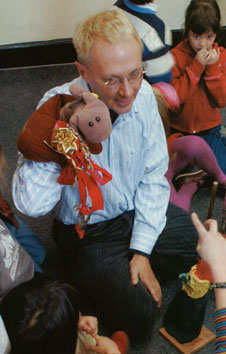